Machine learning is a fascinating topic. A new, revolutionary model or tool is constantly being thrown into the ring. And every time there are similar discussions.
Misuse of the technology, infringement of intellectual property, loss of jobs and creativity.
And on the other side there are the overenthusiasts. Just one more step until "AI" does everything unpleasant for us, no one has to work anymore and all our problems are solved. Poverty? World hunger? Wars? As good as gone.
Every now and then you also hear more realistic voices saying that these models and apps like ChatGPT, Dall-E or Midjourney are just tools at the beginning of their development process. And they are here to stay. No one will be able to make them disappear again. It doesn't matter whether intellectual property has been violated or whether they are being misused. And they won't be able to solve our big problems in the foreseeable time either.

But these tools can already solve one of my small problems. Lack of creativity when I need it. Let's say I want to create a unique monster for a D&D adventure. The group meets the next day, I'm overtired and my brain can't come up with anything useful. It would be nice to have a creative discussion partner who can come up with a concept in a matter of seconds. And I would also like a nice picture of the monster to go with it.

So I ask ChatGPT if it can generate a description and statistics of a monster for me. I set the rough direction. 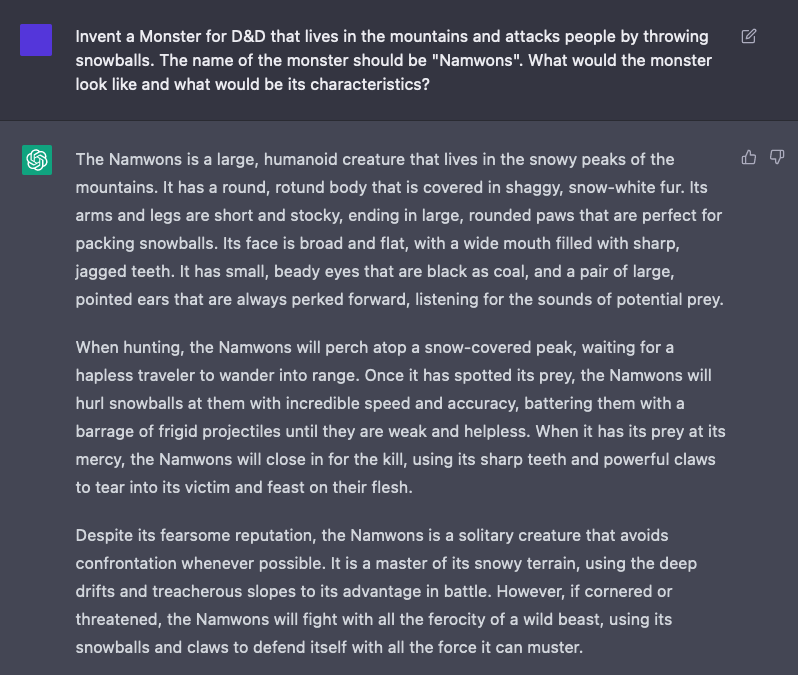 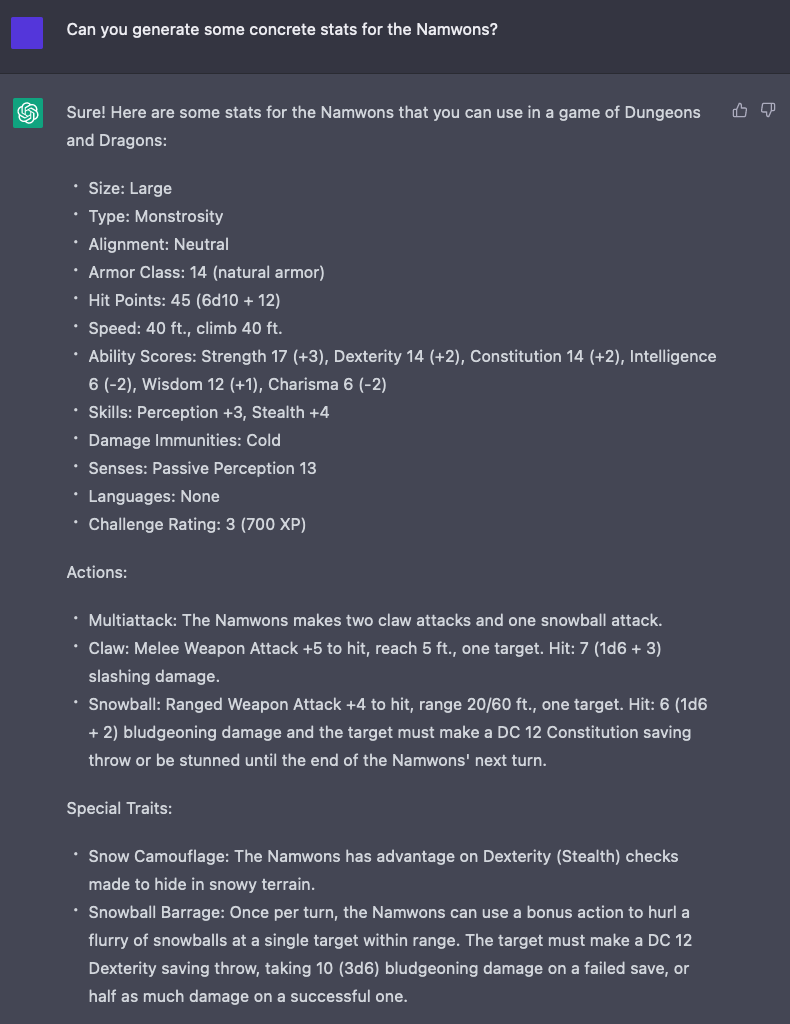 That's... surprisingly good. Even the stats make some sense. In another experiment, ChatGPT even generated legendary actions for me.
However, it is also noticeable that the structures of the texts are consistently relatively similar. In most of my tests, there was a sentence that began with "Despite its fearsome reputation [...]". I think that if you generate a large number of monsters, you will very quickly come across repetitions in the text structure.

But well, now I have a monster, but I would also like to have a picture of it. So I adapt the first paragraph a bit to make the description more suitable for Midjourney and hope that something useful will come out of it. And indeed I get a few suggestions that are probably acceptable. 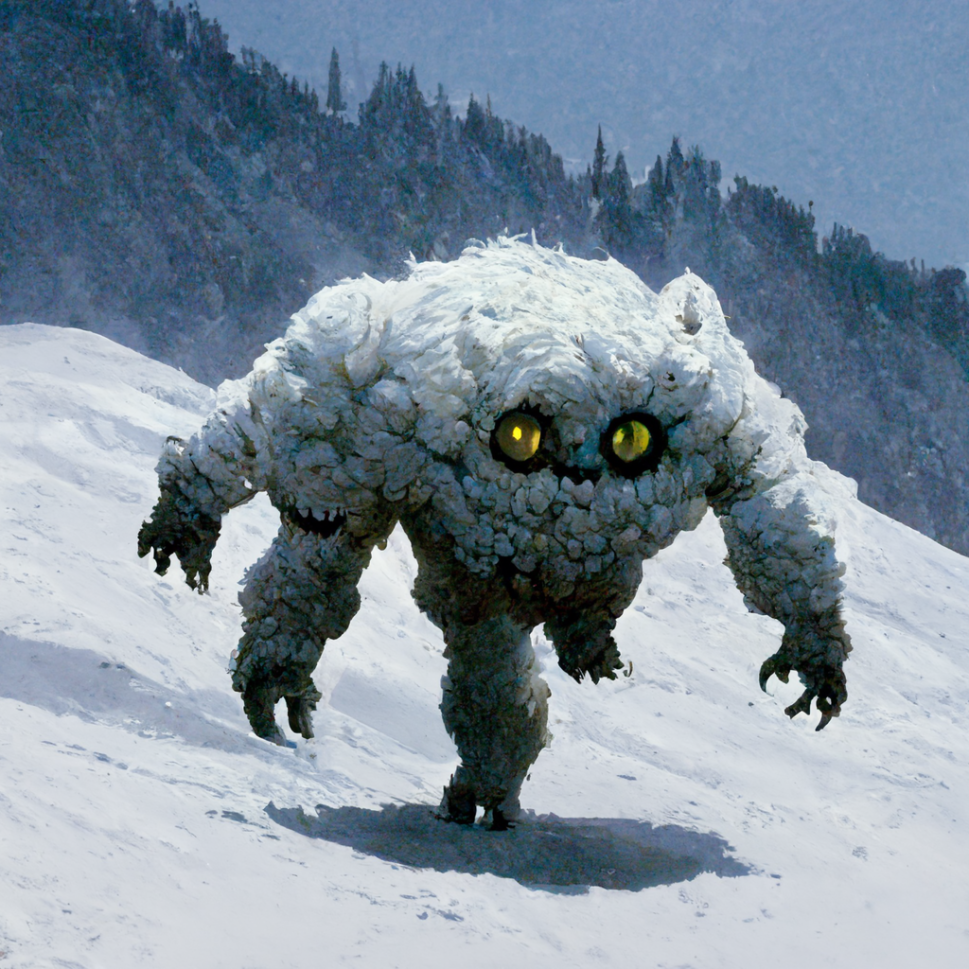 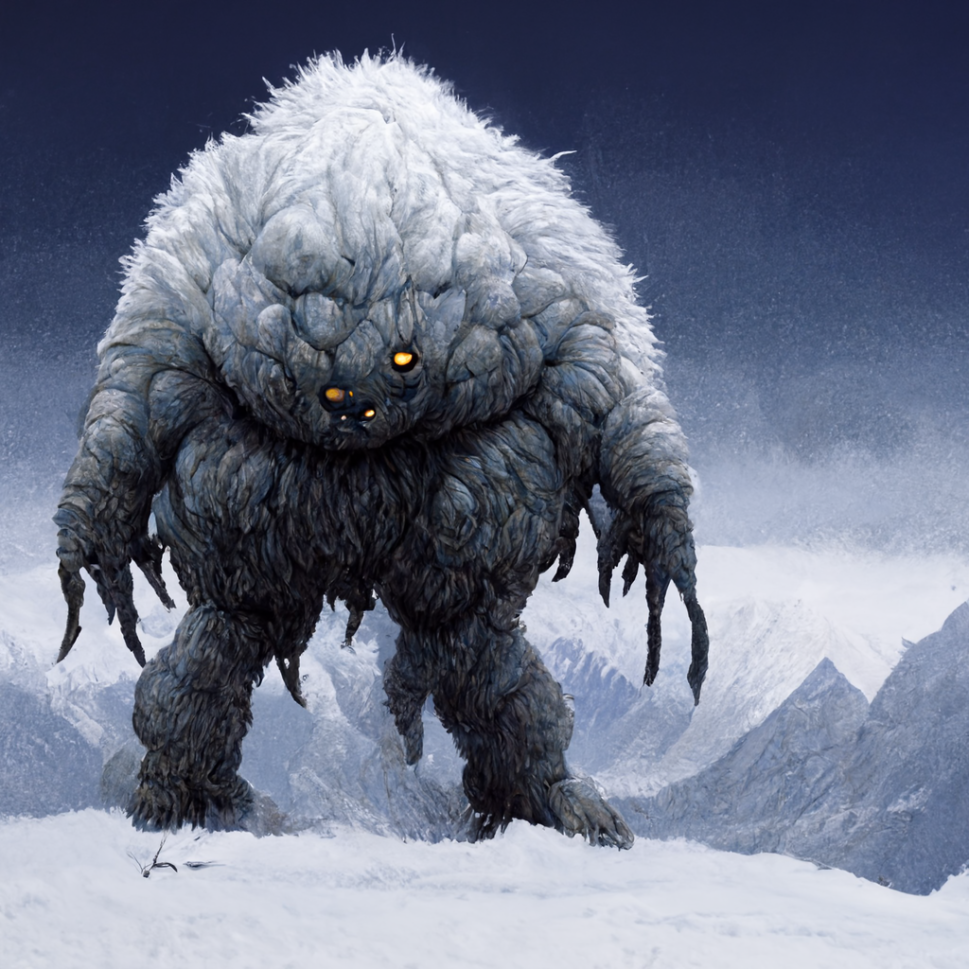 Some features are ignored or interpreted strangely, but hey, that's the limitations of the technology.
Is this a substitute for an illustrator doing paintings for a book for me? Absolutely not. Is this enough for the round of players to get a better picture of the monster? Definitely.

I wanted to go one step further. What if I didn't have to introduce the monster myself. I could just use one of those AI-voiceover services. There are quite a few of them now. I simply took the first one that offered a free demo and generated the following audios from it:

Okay, that's not really that good yet. But maybe a few more years and you could have all the epic locations, antagonists and situations described by an equally epic voice.

And even if most people might be rather opposed to this, I can well imagine that in the future there will be RPG sessions with "AI" generated content that is not only exclusively performed by the game master. In board games like Gloomhaven or Bardsung, there are already companion apps that read out scenarios for the players. So why not in Dungeons & Dragons or Shadowrun?